I just had a great article sent in on learning to use cameras………….with Manual Film Cameras!

Yes – you heard right: “learn with a film camera!” THAT is how I learnt way back in film days and processed all my own black and white stuff in a darkroom! The number of dials, settings and buttons were nothing like as plentiful and the huge range that can be found on most digital cameras.

I started out with a Retinax(?NOT sure that was the name even…) rangefinder film camera that had a viewfinder above the lens. Then I progressed to Pentax, Olympus SLRs and various others.

Learning on those cameras was quite a process and the points below will really illustrate what I mean! This article was published on PictureCorrect from Kai W at DigitalRev TV! 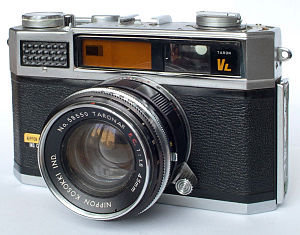 When I learned about photography for the first time, it was in my high school’s darkroom with a fully-manual Pentax K1000, which was at one time possibly the most prolific and popular SLR camera on the market. Why, you ask? Because it was built like a brick (which is mainly what makes them a popular decisions for school boards around the world), have a fast maximum shutter speed, and don’t have very much else. After all, there is nothing more detrimental to the learning process than distractions such as buttons, knobs, and menus. Most people today are learning photography on entry-level DSLRs, which, while more basic than a fancy high-end digital, are still needlessly convoluted and, worst of all, easy to use!

When you learn something new, what is it you want to know first? Most people would probably agree: the basics. Manual cameras are nothing but basics, and they will start your education from the very foundation, leaving you no choice but to meditate on composition and the exposure triangle of aperture, shutter speed, and ISO. In this video, the infamous Kai W explains why he believes that the art of photography is best learned on a manual film camera

To recap his 10-point argument, everyone should learn on a manual film camera because:

More often than not, when a person buys a new DSLR, they use it on auto mode indefinitely. The pictures they produce are great, and they feel satisfied with that. This is a fine course to take for anyone who just wants to preserve memories, but if you’re really serious about learning how to make a great image, it won’t be long before you’re watching YouTube tutorials and bugging your local camera store clerk for advice on how to go further with your photography.

For those who are really serious about understanding these machines, the modern DSLR, with all its complex bells and whistles, can be convoluted and difficult to understand.

Successful images may make you feel good about yourself, but it’s through failure that we all learn best. The constraints imposed by manually-controlled film photography force the mind into a place of problem-solving the deep intellectual involvement, which ramps up our brain’s ability to absorb information.

By limiting our possible shots from the thousands down to a 24-exposure roll of film, we have no choice but to consider our every move, our every shot; to think critically about what we have done in the past and what we should do in the future, and to engage our minds in the acquisition of a valuable new skill.

What are your thoughts on this article? Join the discussion on Facebook or Google+