↓
Home→Off the Rails – The Blues Band 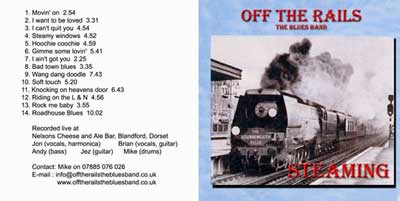 Off the Rails – The Blues band

Formed in 1993 or there abouts, the band was the ‘brainchild’(?????????) of the 2 original members – Brian and Mike. They had been playing in various bands for a number of years and had met up quite by chance when asked to play in a small, middle of the road outfit. It soon became apparent that this wasn’t going anywhere, so they decided to form a band to play what was their favourite music – Blues, or more precisely, a rocky blues style. Some of the songs in the band’s set are taken from the 9 Below Zero – the driving sound preferred!

Well, the first incarnation of ‘Rails’ (they never even had a name at that time!) lasted about 1 gig and a few rehearsals – then the singer decided to emigrate to the Far East to play the bars and whatever else he could find to do. It was never decided if it was something that was said ……. or what! The bass player also decided to up sticks and leave the county…… This was not a very good start, but another bass player was found in the form of Johnny Mac, a bassist of long standing, and previous auditions with Supertramp.

As a singer was not to be found at this time, Brian decided to do the honours, and it seemed to work out well enough as he’s still at it!

After a few early gigs in the Kings Arms in Dorchester another member was introduced to the band – JB – a vocalist and harmonica player. It also turned out that he plays guitar when asked, but he reckons he’s getting a bit rusty on that!

With the introduction of JB, the band’s repertoire was extended by a completely different set of numbers, some of which are still dusted off nowadays. A lot of these songs are standard blues with the ‘Rails’ interpretation and excellent blues harmonica performances from JB.

After a while – years, months – who can remember? there were a few alterations to the line up, but eventually Johnny Mac introduced a guitarist who was to change the format of the band’s music to a much rockier style. The man was Jez Lee and his playing was an excellent contrast to the laid back Blues/jazz style of Brian’s.

Well, a while later Johnny Mac was to leave to join the Splinter rock band from Weymouth. This meant looking for another bass player – fortunately, not a long look. JB asked the bass player with his old band – Strong Constitution – Andy. Well Andy managed to stick it out with ‘Rails’ for a few years and it was during this period with Jez that the Steaming CD was recorded live at the Cheese and Ale Pub in Blandford.

As is the way of all things, Jez was to leave after a few years with ‘Rails’, to form his own band – Balance of Power, a 5 piece 80s rock band.

After Jez left, ‘Rails’ played as a 4 piece until another guitarist was found. The man filling the position now is Neil – formerly of the Mark Penfold R&B All Stars(!) Mike was also a member of this rock and roll band and somehow persuaded Neil that his lifetime ambition was to be in the ‘Rails’ band. Neil is also required to play with a celiegh band and the Jamie Turner Rock and Roll band.

This line–up – Brian, JB, Andy, Neil and Mike lasted a while, but again things progress and Andy was about to go off and form the Vinyl Monkeys. Yet another bassist was required!! Bit like the drummers in Spinal Tap except that none of these guys exploded that we know of….

Who was the next man to fill the bass shoes? Well, none other than the guy who recorded the Steaming CD….Ian is now the resident bass player, also playing in his own rock and roll band – the Hub Caps. He’s also been known to play bass with a Morris Dance troupe.

ONE other thing that has turned up!!

While milady was decorating one of our rooms the other day, she was playing some old cassette tapes, with a view to getting rid of any stuff that really was not needed.

Well, on one such day she was playing a cassette and thought “Is that really Joe Satriani playing Big Bad Moon? Then she recognized the vocal! It was Brian Cornish from the Off the Rails Band!

The line up was, as far as I can remember, Brian (guitar and vocal), Jon Bourbon (harmonica), Mike Finding (Drums), Andy Waite, (Bass Guitar) we think and a certain Mr Jez Lee on lead guitar. This was, we think recorded at the Nelson Cheese and Ale House, Blandford Forum in Dorset, way back in the 90s. The recording gear was a tape player / recorder of SOME kind and I cannot for the life of me remember how or what! (I have since learned that the recording gear was an old ghetto blaster (remember those?) placed down in front of the band!!

Why would this sound like Joe Satriani? Have a listen and see what you think of Jez Lee’s guitar playing – he’s a most superb player and a real nice guy as well….

Listen to the MP3 from the tape

“We all have two choices: We can make a living or we can design a life.”– Jim Rohn